The Alchemy of Chains, Bondage, Tokemak

We would like to introduce the new version of our community-led newsletter. Here you will be able to get a fortnightly summary of major events on discord, governance forums, twitter, and the general Alchemix community.

As always, we are asking for your ideas, articles and article requests, art, or anything else you want to offer to benefit the newsletter. Your support will not go unrecognized and the tip bot has been loaded up.

Let’s dive into our October Update! There is a lot to discuss - everything from protocol stats and Chainlink, to Olympus DAO and Tokemak, and so much governance.

Community artwork in this issue is courtesy of community member ! Jacob !. 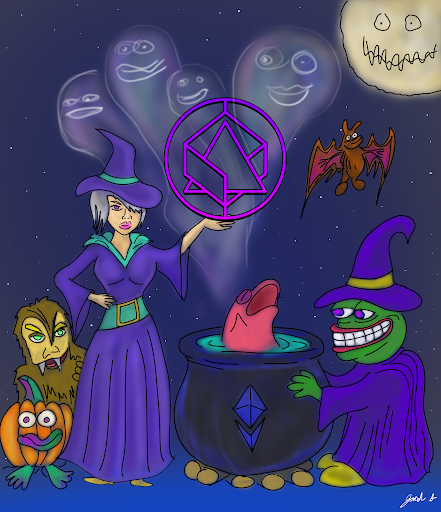 This art piece was made for one of my all time favorite projects Alchemix, #ALCX. In the Halloween spirit they are cooking u some WAGMI soup :). Limited Edition Minting 5 pieces only.
Created by Jacobs1985View on OpenSea

The number of Alchemix Twitter followers and Discord members continues to steadily increase. During the month of October we have also seen a nice rise in yields in both the DAI and ETH Vaults.

The long-awaited Alchemix Patron NFT can now be minted. There has been a significant level of interest from the community regarding the availability of this NFT. If you donated to Alchemix earlier in the year then you may be eligible to claim one.

Alchemix @AlchemixFi
The Alchemix Patron NFT is now available for minting. It contains metadata for how much ETH or alETH you sent to the Alchemix DAO treasury. Stay tuned for how this will be used in Alchemix in the future! app.alchemix.fi/claim

Alchemix has increased the maximum payout for critical bugs found via its Immunefi bug bounty program to $500,000. This increase was first proposed by Scoopy Trooples in September as part of AIP-23, and was strongly endorsed by the community with 100% of the votes in favor.

Immunefi @immunefi
New Increase: $500k in Bug Bounty Payout Amount! @AlchemixFi has increased their bug bounty payout on the Immunefi platform. Alchemix: Spend & save, with self-repaying loans. No liquidations. Get your bug hunting on & get yourself $500,000: Alchemix Bug Bounties | ImmunefiFind bugs and vulnerabilities on Alchemix and get paid up to $500,000.immunefi.com

With our official partnership and integration with Chainlink Keepers, and Chainlink price feeds, Alchemix will be actively moving towards true decentralization.

Chainlink Keepers will allow for the automation of yield harvesting and debt repayment function of Alchemix, with no human interaction ensuring a decentralized and autonomous protocol.

The Chainlink price feed launch being sponsored by Alchemix will allow for many DeFi applications to now seamlessly add support for ALCX as collateral.

More information about the Chainlink partnership can be found in the medium article:

Scoopy Trooples recently revived the concept of DeFi 2.0 in a twitter thread:

self-repaying scoopy 2.0 @scupytrooples
Over the course of 2022, we have seen the rise of what has been called "DeFi 2.0". As a farmer, degen, student, and builder in DeFi, the vision of the future of DeFi is beginning to materialize in my mind's eye. 🥁 THREAD TIME

Tokemak’s Collateralization of Reactors Event (C.o.R.E) concluded on October 4th, with Alchemix obtaining the enviable position of 2nd, ahead of 34 other prominent DeFi projects.

Alchemix @AlchemixFi
We’d like to thank all those who voted for the ALCX #tokemak reactor. We came 2nd! Woohoo 🧙‍♂️🧚‍♀️

TOKE stakers and LPs were eligible to vote for their preferred project over the course of a week from September 28th, and the vote went down to the wire. Competition to be amongst the first five token reactors was fierce, with the leading projects changing regularly throughout the duration of the vote.

Statistics produced by Tokemak after the C.o.R.E revealed Alchemix achieved the 2nd highest number of unique voting addresses, comfortably ahead of the 3rd place reactor.

All who voted for Alchemix in the C.o.R.E event will be eligible for an NFT, which is rumoured to have some future utility in the Alchemix DAO.

Alchemix @AlchemixFi
With a little over 12 hours left in the @TokenReactor CoRE event, we want to let you know that win-or-lose, everyone who voted for ALCX will be eligible to receive an NFT from us. We appreciate your support and are thankful for all who voted for us!

The Problem: Raising liquidity for a new protocol is costly, inefficient, and inflationary.

The Answer: In its simplest form, users are playing a game of balancing the reactors. The reactors incentivize a ‘balance’ between the value of assets deposited and TOKE staked through a variable APY.

The Tokemak holds large reserves on USDC and ETH and sets up one sided liquidity reactors where investors can single stake a token to be matched by the ETH in the Tokemak treasury.

For an overview of how to provide ALCX liquidity to Tokemak, see the Tokemak FAQ in the forums. Tokemak’s own medium also contains a number of useful posts.

One principle feature of Tokemak is that there’s no impermanent loss - a great way for protocols to jumpstart liquidity by renting it before being able to bond and own it. This brings us smoothly to our next section and partnership: Olympus DAO Bonding Program.

Instead of renting liquidity via inflationary LP mining, Protocols can now own their Liquidity via the Olympus DAO pro bonding program. This will help curb the addiction to toxic LP mining by users whose only objective is to extract maximum value from the project.

As liquidity mining program matures and rewards taper off, we can begin to purchase our previously rented liquidity and create a base of protocol-owned liquidity for security and permeance. Alchemix is doing this by buying LP shares off of its liquidity providers using ALCX bonds.

Olympus DAO bonds are purchased at a market-determined discount, and vest linearly over one week. This strongly disincentives toxic farming and ensures that value is captured by people with a longer horizon for the project.

Community member Ov3rkoalafied produced a fantastic article about how to use bonding to outperform ALCX single stake:

This section of the newsletter will summarize all active proposals (open for voting or going to a vote soon), as well as outline any proposals that have been passed since the last newsletter.

For your security, we need to re-authenticate you.